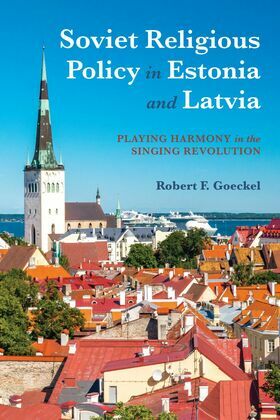 Soviet Religious Policy in Estonia and Latvia considers what impact Western religious culture had on Soviet religious policy. While Russia was a predominantly Orthodox country, Baltic states annexed after WWII, such as Estonia and Latvia, featured Lutheran and Catholic churches as the state religion. Robert Goeckel explores how Soviet religious policy accommodated differing traditions and the extent to which these churches either reflected nationalist consciousness or offered an opportunity for subversion of Soviet ideals. Goeckel considers what negotiating power these organizations might have had with the Soviet state and traces differences in policy between Moscow and local bureaucracies.

Based on extensive research into official Soviet archives, some of which are no longer available to scholars, Goeckel provides fascinating insight into the relationship between central political policies and church responses to those shifting policies in the USSR. Goeckel argues that national cultural affinity with Christianity remained substantial despite plummeting rates of religious adherence. He makes the case that this affinity helped to provide a diffuse basis for the eventual challenge to the USSR. The Singing Revolution restored independence to Estonia and Latvia, and while Catholic and Lutheran churches may not have played a central role in this restoration, Goeckel shows how they nonetheless played harmony.