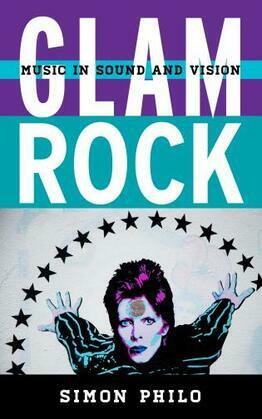 Until recently, glam rock has featured as a mere footnote in popular music history: a style over substance lark in an otherwise serious industry. Glam Rock: Music in Sound and Vision reveals the true story of how glam carved out a place as a diverse musical style and how it related to the artistic, political, economic, emotional, sexual, and commercial scenes of the late twentieth century. Committed to spectacle but also to musical ingenuity, glam delivered an exhilarating burst of color that offered a joyful re-boot for pop culture. “A total blam blam!”

Glam swept through Britain to North America in the early 1970s with the foundational stardom of T Rex and David Bowie, offering an alternative to the established rock and pop styles which had started to bore a segment of young listeners. As Alice Cooper and KISS became box-office smashes, British acts as diverse as the Rolling Stones, Elton John, and Queen consciously adopted glam’s flair for drama. Refreshing and reinvigorating, glam influenced later musical movements and moments from glitterfunk to punk, from new wave to new romanticism, and from hair metal to the synth-pop of self-conscious changelings like Marilyn Manson and Lady Gaga.

In Simon Philo’s engaging history, glam finally gets the spotlight it deserves. As an essential force in the history of popular music, glam offers a prism through which to explore 70s’ pop culture in all its glitter and charm.