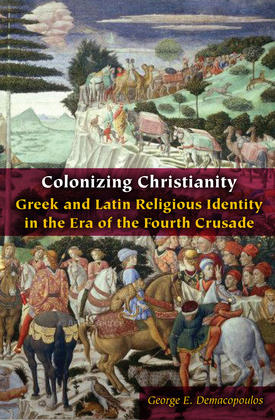 by George E. Demacopoulos (Author)
Excerpt
Nonfiction History Medieval Religion Orthodox
warning_amber
One or more licenses for this book have been acquired by your organisation details
EPUB
Unlimited loans, One at a time
Details
“A truly extraordinary reevaluation of historical events in light of new theoretical approaches . . . groundbreaking.” —Journal of Orthodox Christian Studies

Colonizing Christianity employs postcolonial critique to analyze the transformations of Greek and Latin religious identity in the wake of the Fourth Crusade. Through close readings of texts from the period of Latin occupation, this book argues that the experience of colonization splintered the Greek community over how best to respond to the Latin other while illuminating the mechanisms by which Western Christians authorized and exploited the Christian East. The experience of colonial subjugation opened permanent fissures within the Orthodox community, which struggled to develop a consistent response to aggressive demands for submission to the Roman Church.

“Colonizing Christianity's analysis of a number of texts through the lens of colonial and postcolonial theory makes for useful, important, reading. There are significant stakes both for medieval historians and those committed to finding pathways of reconciliation among contemporary Christians.” —David Perry, author of Sacred Plunder: Venice and the Aftermath of the Fourth Crusade
Publication date
May 20, 2021
Publisher
Fordham University Press
Collection
Orthodox Christianity and Contemporary Thought
Page count
272
ISBN
9780823284443
Paper ISBN
9780823284436
File size
1 MB