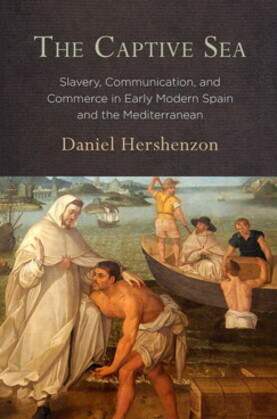 In The Captive Sea, Daniel Hershenzon explores the entangled histories of Muslim and Christian captives—and, by extension, of the Spanish Empire, Ottoman Algiers, and Morocco—in the seventeenth century to argue that piracy, captivity, and redemption formed the Mediterranean as an integrated region at the social, political, and economic levels. Despite their confessional differences, the lives of captives and captors alike were connected in a political economy of ransom and communication networks shaped by Spanish, Ottoman, and Moroccan rulers; ecclesiastic institutions; Jewish, Muslim, and Christian intermediaries; and the captives themselves, as well as their kin.

Hershenzon offers both a comprehensive analysis of competing projects for maritime dominance and a granular investigation of how individual lives were tragically upended by these agendas. He takes a close look at the tightly connected and ultimately failed attempts to ransom an Algerian Muslim girl sold into slavery in Livorno in 1608; the son of a Spanish marquis enslaved by pirates in Algiers and brought to Istanbul, where he converted to Islam; three Spanish Trinitarian friars detained in Algiers on the brink of their departure for Spain in the company of Christians they had redeemed; and a high-ranking Ottoman official from Alexandria, captured in 1613 by the Sicilian squadron of Spain.

Examining the circulation of bodies, currency, and information in the contested Mediterranean, Hershenzon concludes that the practice of ransoming captives, a procedure meant to separate Christians from Muslims, had the unintended consequence of tightly binding Iberia to the Maghrib.