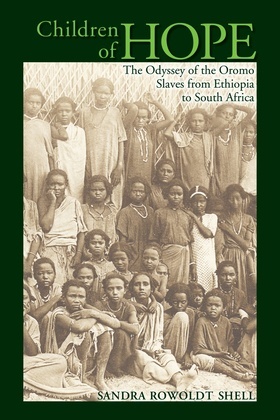 In Children of Hope, Sandra Rowoldt Shell traces the lives of sixty-four Oromo children who were enslaved in Ethiopia in the late nineteenth century, liberated by the British navy and ultimately sent to Lovedale Institution, a Free Church of Scotland mission in the Eastern Cape, South Africa, for their safety. Because Scottish missionaries in Yemen interviewed each of the Oromo children shortly after their liberation, we have sixty-four, structured life histories told by the children themselves.

In the historiography of slavery and the slave trade, first passage narratives are rare, groups of such narratives even more so. In this analytical group biography (or prosopography), Shell renders the experiences of the captives in detail and context that are all the more affecting for their dispassionate presentation. Comparing the children by gender, age, place of origin, method of capture, identity, and other characteristics, Shell enables new insights unlike anything in the existing literature for this region and period.

Children of Hope is supplemented by exquisite graphs, maps, and illustrations that carefully detail the demographic and geographic layers of the children’s origins and lives after capture. In this way, she honors the individual stories of each child while also placing them into invaluable and multifaceted contexts.