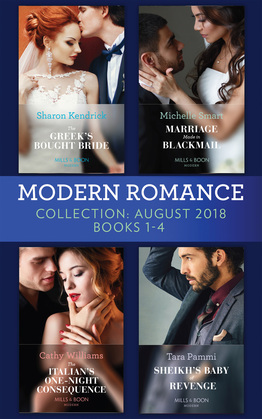 She gave him her innocence…He’ll give her his ring!

Tamsyn lost her innocence in a spectacularly sensual night with a Greek billionaire. She didn’t expect to see notorious playboy Xan again, until he proposes a marriage of convenience! It’s hard to refuse when he’s promising incredible wealth and her pregnant sister desperately needs support, but Xan is dangerously addictive… If Tamsyn isn’t careful, she could lose herself to the Greek—for good!

Marriage Made in Blackmail by Michelle Smart

The tycoon’s demand: ‘You have to marry me first…’

Luis Casillas’s reputation needs restoring after a scandalous business feud. Chloe Guillem will pay for her part in it—by marrying him! He’ll keep her captive on his Caribbean island until she agrees. Their explosive chemistry can only sweeten the deal, but Luis requires more than blackmail to make fiery Chloe his bride… And he’s not above using seduction to secure her surrender!

Between the billionaire’s sheets…Bound by a shocking consequence!

Leo Conti is determined to secure a crucial business acquisition—until he meets Maddie Gallo. When their irresistible chemistry ignites, it’s unforgettable! Then Leo learns the truth: Maddie is heiress to the company he plans to take over—and she’s pregnant! Now it’s his heir that must be secured. Can Leo strike a deal to meet Maddie at the altar?

He ruthlessly seduced her…Now he’ll steal her to keep his heir!

Seeking revenge for his royal family’s rejection, warrior sheikh Adir seduces his brother’s innocent fiancée! But when he returns to steal Amira from the altar he discovers their illicit encounter has left her pregnant. Secluded in the desert, longing soon consumes them. But Adir’s baby must be legitimate—and he’ll claim his heir with a vow!