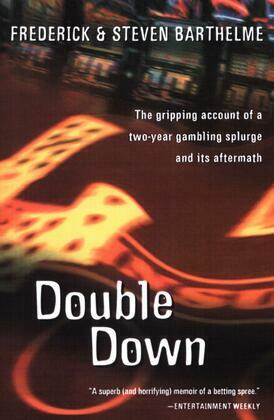 “An exquisitely crafted memoir” by two brothers who lost their parents, lost their inheritance—and almost lost their freedom (The Wall Street Journal).

Frederick Barthelme and his brother Steven were both accomplished, respected writers with stable adult lives when they lost both of their parents in rapid succession. They had already lost their other brother, just a few years earlier. Suddenly they were on their own, emotionally unmoored—and unprepared for what would happen next.

Their late father had been a prominent architect, and the brothers were left with a healthy inheritance. Over the following several years, they would lose close to a quarter million dollars in the gambling boats off the Mississippi coast. Then, in a bizarre twist, they were charged with violating state gambling laws, fingerprinted, and thrown into the surreal world of felony prosecution.

For two years these widely publicized charges hung over their heads, shadowing their every step. Double Down is the wry, often heartbreaking story of how Frederick and Steven Barthelme got into this predicament. It is also a reflection on the allure of casinos and the pull and power of illusions that can destroy our lives if we aren’t careful.

“One of the best firsthand accounts ever written about organized gambling. Like Goodman Brown, taking a walk with a hooded stranger into the darkness of the New England woods, the Barthelme brothers suddenly find themselves inside the maw of the monster. The compulsion to control, to intuit the future, to be painted by magic, could not be better or more accurately described.” —James Lee Burke

“Beautifully evoking the gamblers’ addiction, their mesmerizing account is best read as a novel Camus might have imagined, with the writer/protagonists as their own lost characters. A work of high art; enthusiastically recommended.” —Library Journal