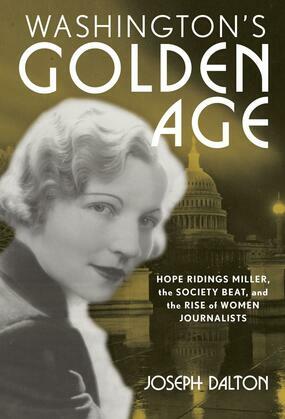 Real news traveled fast, even in the days before internet connections. During the New Deal and World War II, Washington elites turned to Hope Ridings Miller’s column in the Washington Post to see what was really going on in town. Cocktail parties, embassy receptions and formal dinners were her beat as society editor. “I went as a guest,” said Miller, “and hoped that they’d forget I was a reporter.”

In Washington’s Golden Age, Joseph Dalton chronicles the life of this pioneering woman journalist who covered the powerful vortex of politics, diplomacy, and society during a career that stretched from FDR to LBJ. After joining the Post staff, she was the only woman on the city desk. Later she had a nationally syndicated column. For ten years she edited Diplomat Magazine and then wrote three books about Washington life. Once a girl from a small town in Texas, Miller created a web of connections at the highest levels. In Washington’s Golden Age, Dalton escorts readers inside the Capital’s regal mansions, the hushed halls of Congress, and the Post’s smoky and manly newsroom to rediscover an earlier era of gentility and discretion now relegated to the distant past.