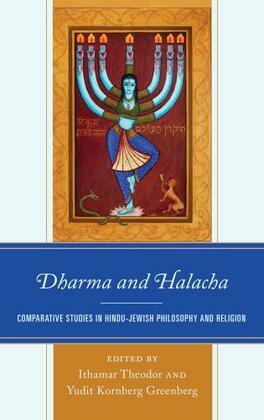 In recent decades there has been a rising interest among scholars of Hinduism and Judaism in engaging in the comparative studies of these ancient traditions. Academic interests have also been inspired by the rise of interreligious dialogue by the respective religious leaders. Dharma and Halacha: Comparative Studies in Hindu-Jewish Philosophy and Religion represents a significant contribution to this emerging field, offering an examination of a wide range of topics and a rich diversity of perspectives and methodologies within each tradition, and underscoring significant affinities in textual practices, ritual purity, sacrifice, ethics and theology.

Although there are strong parallels between Hinduism and Judaism in topics such as textual practices and mystical experience, the link between these two religious systems, i.e. Dharma and Halacha, is especially compelling and provides a framework for the comparative study of these two traditions.

The book begins with an introduction to Hindu-Jewish comparative studies and recent interreligious encounters. Part I of the book titled “Ritual and Sacrifice,” encompasses the themes of sacrifice, holiness, and worship. Part II titled "Ethics," is devoted to comparing ethical systems in both traditions, highlighting the manifold ways in which the sacred is embodied in the mundane. Part III of the book titled "Theology," addresses common themes and phenomena in spiritual leadership, as well as textual metaphors for mystical and visionary experiences in Hinduism and Judaism. The epilogue offers a retrospective on Hindu-Jewish encounters, mapping historic as well as contemporary academic initiatives and collaborations.