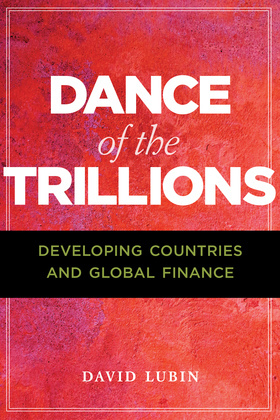 The Dance of the Trillions

Just after the end of the First World War, Cuba’s economy soared on rising sugar prices and a favorable global climate for Cuban sugar. In the first half of 1920, credit and finance flowed into the island nation, furthering the “Dance of the Millions,” as the good times were called. But by the end of 1920, tightening U.S. monetary policy and recovering European production changed Cuba’s boom to a bust.

In Dance of the Trillions, David Lubin tells the story of what makes money flow from high-income countries to lower-income ones, and what makes it flow out again. He follows a trajectory from the emergence of petrodollars, global inflation, and the U.S. Federal Reserve in the 1970s; to Latin America’s “lost decade” of the 1980s; to the rise of China since the early 2000s.

Looking ahead, Lubin explores how the relationship between developing countries and international finance seems to be moving from a “Washington Consensus” to one shaped by Beijing.