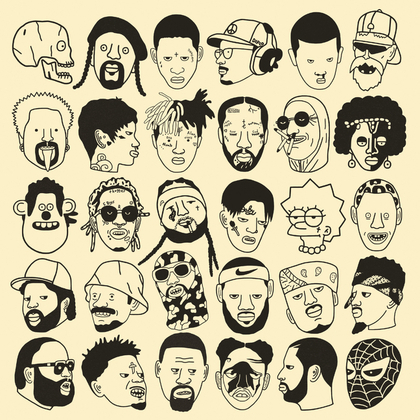 Four years ago, a Post-it® note changed Marlon Sassy’s life. Using office supplies “borrowed” from his admin job, Sassy began creating colorful sketches of rappers in highlighter, Sharpie, and pen. He made his debut posting his rendition of Snoop on Tumblr under the pseudonym “Gangster Doodles.” Next was Bart Simpson and Biggie, then Yams and Yeezy. Soon, he had amassed a cult following of fans who clamored for his next artistic interpretation.

Gangster Doodles brings together more than 400 of his most popular illustrations with thirty never-before-seen pieces. An impressive and comprehensive A–Z compendium, it features everyone from Black Jesus to Beyoncé, Kendrick Lamar to LeBron James, Jean-Michel Basquiat to Young Thug, and Kermit the Frog to Action Bronson. This is the ultimate gift for rap fanatics and pop culture addicts alike.