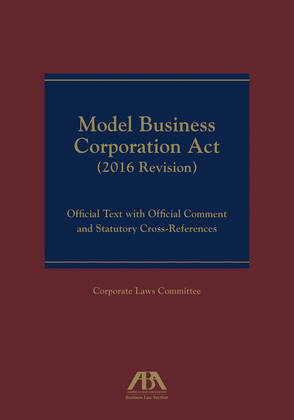 The Model Business Corporation Act (2016 Revision) is the first complete revision of the Model Act since 1984. The Model Act is a free-standing corporation statute that can be enacted in its entirety by a state legislation. It is the basis for the general corporation statute in 32 states and the District of Columbia, and is the source for many provisions in the general corporation statutes of other states. It is an important and often cited reference for courts, lawyers, and scholars, as well as a useful source of study and discussion in law schools in the U.S. and elsewhere. Through periodic amendments, the Model Act has evolved in significant ways since 1984. This evolution, however, has been incremental and has not been published in a comprehensive form that could be easily adopted by state legislatures as a means to capture all the changes since 1984. Nor had there been any systematic attempt to revise the Model Act to eliminate inconsistent terminology and adjust provisions that had become outdated since the 1984 revision.

Accordingly, beginning in 2010, the Business Law Section’s Corporate Laws Committee has undertaken a thorough review and revision of the Model Act and its Official Comment. This effort has resulted in the adoption and publication of the Model Business Corporation Act (2016 Revision). The 2016 Revision is based on the 1984 version and incorporates the amendments to the Model Act published in supplements regularly thereafter, with changes to both the Act and its Official Comment. Also included are notes on adoption and revised transitional provisions that are intended to facilitate legislative consideration in adopting the new version of the Model Act. The Committee intends and hopes that the publication of the 2016 Revision will encourage state legislatures—in states that have already adopted all or a substantial part of the Model Act and in other states as well—to consider adopting the Model Act in full and thereby bring their corporate statutes into line with recent developments in corporate law.