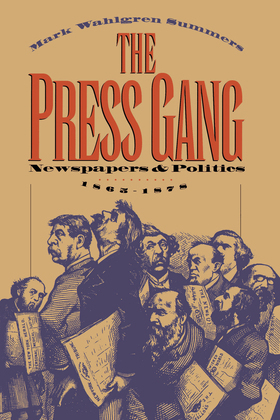 Relations between the press and politicians in modern America have always been contentious. In The Press Gang, Mark Summers tells the story of the first skirmishes in this ongoing battle. Following the Civil War, independent newspapers began to separate themselves from partisan control and assert direct political influence. The first investigative journalists uncovered genuine scandals such as those involving the Tweed Ring, but their standard practices were often sensational, as editors and reporters made their reputations by destroying political figures, not by carefully uncovering the facts. Objectivity as a professional standard scarcely existed. Considering more than ninety different papers, Summers analyzes not only what the press wrote but also what they chose not to write, and he details both how they got the stories and what mistakes they made in reporting them. He exposes the peculiarly ambivalent relationship of dependence and distaste among reporters and politicians. In exploring the shifting ground between writing the stories and making the news, Summers offers an important contribution to the history of journalism and mid-nineteenth-century politics and uncovers a story that has come to dominate our understanding of government and the media.