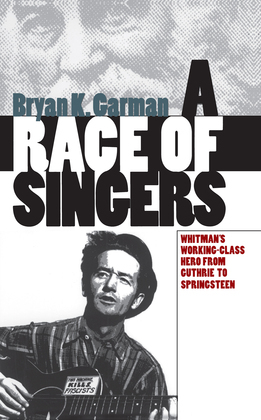 A Race of Singers

When Walt Whitman published Leaves of Grass in 1855, he dreamed of inspiring a "race of singers" who would celebrate the working class and realize the promise of American democracy. By examining how singers such as Woody Guthrie, Bob Dylan, and Bruce Springsteen both embraced and reconfigured Whitman's vision, Bryan Garman shows that Whitman succeeded. In doing so, Garman celebrates the triumphs yet also exposes the limitations of Whitman's legacy.

While Whitman's verse propounded notions of sexual freedom and renounced the competitiveness of capitalism, it also safeguarded the interests of the white workingman, often at the expense of women and people of color. Garman describes how each of Whitman's successors adopted the mantle of the working-class hero while adapting the role to his own generation's concerns: Guthrie condemned racism in the 1930s, Dylan addressed race and war in the 1960s, and Springsteen explored sexism, racism, and homophobia in the 1980s and 1990s.

But as Garman points out, even the Boss, like his forebears, tends to represent solidarity in terms of white male bonding and homosocial allegiance. We can hear America singing in the voices of these artists, Garman says, but it is still the song of a white, male America.