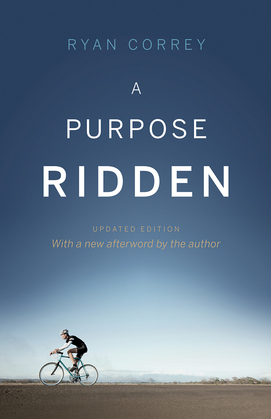 An honest memoir that deconstructs an evolving father?son relationship, uncovers the struggles in becoming one of Canada?s most respected adventure cyclists and the dramatic impact of a recent cancer diagnosis.

In the summer of 1996, a father and his 13-year-old son embarked on a 3400 kilometre bicycle tour across Canada. Affectionately known as ?Manhood Training,? this unique bonding experience became the inspiration for Ryan Correy to break away from convention and turn a passion for cycling into his purpose in life.

The world?s most extreme cycling challenges serve as an evolving proving ground for the young rider ? including self-doubt on a solo tour to Arizona after high school, falling asleep and crashing into a cemetery gate on the gruelling Race Across America (?The toughest sporting event in the world?), murder and robbery along the Pan American Highway (?The longest road in the world?), a near mountaintop helicopter rescue while traversing the infamous Tour Divide (?The longest mountain bike race in the world?), cashing in after being hit by a car in California, hallucinations and foot-crippling pain on a six-day, 20-hour stationary-cycling world record attempt, and plenty more.

With a new afterword by the author detailing his move to Western Canada, eventual marriage and more recent colon cancer diagnosis, A Purpose Ridden is a riveting and emotional memoir that will appeal to cyclists and non-cyclists alike.