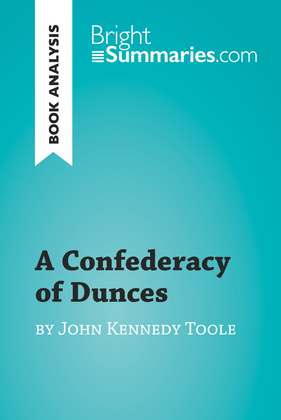 A Confederacy of Dunces by John Kennedy Toole (Book Analysis)

Unlock the more straightforward side of A Confederacy of Dunces with this concise and insightful summary and analysis !

This engaging summary presents an analysis of A Confederacy of Dunces by John Kennedy Toole, a picaresque novel which follows the life of Ignatius J. Reilly, an eccentric, self-absorbed layabout whose endeavours always seem to be doomed to failure. The novel's comic tone stands in sharp contrast to its bleak portrayal of working-class life, and it has been lauded for its accurate and comprehensive depiction of the dialects of New Orleans. John Kennedy Toole was an American novelist whose work was not published until a decade after his suicide at the age of 31. A Confederacy of Dunces is generally considered his masterpiece, and won the Pulitzer Prize for Fiction in 1981.

Find out everything you need to know about A Confederacy of Dunces in a fraction of the time !

See the very best of literature in a whole new light with BrightSummaries !