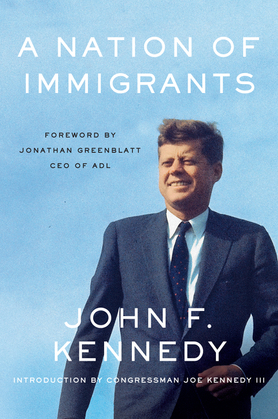 A Nation of Immigrants

This significant contribution to the debate on immigration reform was President John F. Kennedy’s final book and is as timely now as it was when it was first published—now reissued for its 60th anniversary, with a new introduction and foreword.

“In this book, President Kennedy tells us what immigrants have done for America, and what America has done for its immigrants. It is one of the dramatic success stories of world history.... It can stand as a testament to a cause President Kennedy cherished, and which we should carry on.”
— Robert F. Kennedy

Throughout his presidency, John F. Kennedy was passionate about the issue of immigration reform. He believed that America is a nation of people who value both tradition and the exploration of new frontiers, people who deserve the freedom to build better lives for themselves in their adopted homeland. This 60th anniversary edition of his posthumously published, timeless work—with a new introduction, a new foreword by Jonathan Greenblatt, the national director and CEO of the Anti-Defamation League, and updated information on immigration policy reform—offers the late president's inspiring suggestions for immigration policy and presents a chronology of the main events in the history of immigration in America.

As continued debates on immigration engulf the nation, this paean to the importance of immigrants to our nation's prominence and success is as timely as ever.