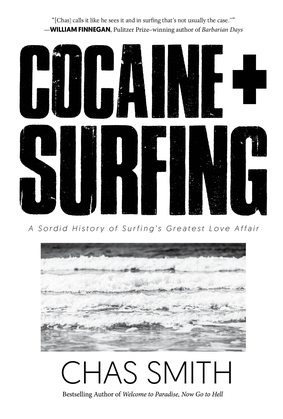 by Chas Smith (Author)
Excerpt
Nonfiction Nature, recreation and sports Sports & recreation Surfing
warning_amber
One or more licenses for this book have been acquired by your organisation details
From the author of Welcome to Paradise, Now Go To Hell, a finalist for the PEN Center USA Award for Nonfiction

It is likely not terribly surprising that surfers like to party. The 1960-70s image, bolstered by Tom Wolfe and Big Wednesday, was one of mild outlaws. Tanned boys who refused to grow up, spending their days drinking beer and smoking joints on the beach in between mindless hours in the water.

As the surf brands accidentally morphed into a multimillion, then multibillion dollar industry beginning in the 1980s, however, the derelict portrait began to harm business. In order to achieve wild year-on-year growth that came to be expected surf trunks, t-shirts and sunglasses had to be sold en mass through Midwestern mall stores. Moms in Des Moines did not want corn-fed junior to be a delinquent. And so the external surf image of the 1980s, 90s into the present became Kelly Slater and Laird Hamilton. Health, vitality, bravery, clean-living, positive and pure with heavy doses of puritanism.

Internally, though, surfing had moved on from booze and weed to its heart’s true home, its soul’s twin flame. Cocaine’s rise in American popular culture as the choice of rich, white elites was matched, then quadrupled, within surf culture. The parties got wilder, the nights stretched longer, the stories became more ridiculously unbelievable. And there has been no stopping, no dip in passion.

The surfer and his lover are entwined in gorgeously dysfunctional embrace. A forbidden love like Romeo and his Juliet and few, if any, outside the insular surf world knew or know about this particular rhapsody. A byzantine ethic keeps interlopers far away. Bad behavior is also kept very well-hidden, even from insiders, but evidence of psychosis rears its head from time to time. Overdoses, bar fights, surf contests and murders and cover-ups.