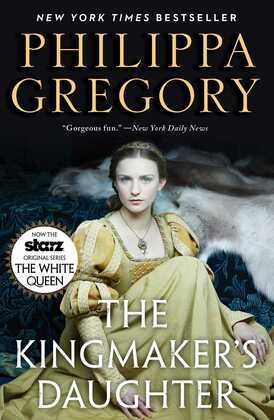 In this New York Times bestseller that inspired the critically acclaimed Starz miniseries The White Queen, Philippa Gregory tells the tale of Anne Neville, a beautiful young woman who must navigate the treachery of the English court as her father, known as the Kingmaker, uses her and her sister as pawns in his political game.

The Kingmaker's Daughter--Philippa Gregory's first sister story since The Other Boleyn Girl--is the gripping tale of the daughters of the man known as the Kingmaker, Richard Neville, Earl of Warwick: the most powerful magnate in fifteenth-century England. Without a son and heir, he uses his daughters, Anne and Isabel, as pawns in his political games, and they grow up to be influential players in their own right.

At the court of Edward IV and his beautiful queen, Elizabeth Woodville, Anne grows from a delightful child to become ever more fearful and desperate when her father makes war on his former friends. Married at age fourteen, she is soon left widowed and fatherless, her mother in sanctuary and her sister married to the enemy. Anne manages her own escape by marrying Richard, Duke of Gloucester, but her choice will set her on a collision course with the overwhelming power of the royal family.