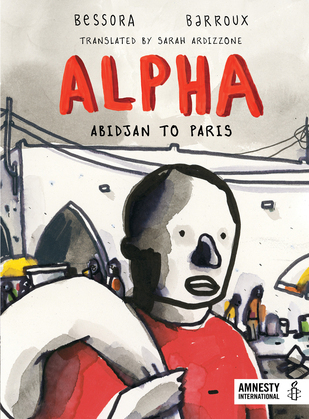 Alpha's wife and son left Côte d'Ivoire months ago to join his sister-in-law in Paris, but Alpha has heard nothing from them since. With a visa, Alpha's journey to reunite with his family would take a matter of hours. Without one, he is adrift for over a year, encountering human traffickers in the desert, refugee camps in northern Africa, overcrowded boats carrying migrants between the Canary Islands and Europe's southern coast, and an unforgettable cast of fellow travelers lost and found along the way. Throughout, Alpha stays the course, carrying his loved ones' photograph close to his heart as he makes his perilous trek across continents.

Featuring emotive, full-color artwork created in felt-tip pen and wash, Alpha is an international award?winning graphic novel supported by Amnesty International that received the PEN Promotes Award and Doctors Without Borders Prize, and was longlisted for the CILIP Kate Greenaway Medal. The U.S. edition is sponsored by Le Korsa, a nonprofit organization devoted to improving human lives in Senegal.

Bessora is an award-winning writer of Swiss, German, French, Polish, and Gabonese heritage whose work has been anthologized in Best European Fiction.

Barroux is a French graphic artist who spent much of his childhood in North Africa and whose illustrations have appeared in the New York Times, Washington Post, and Forbes.