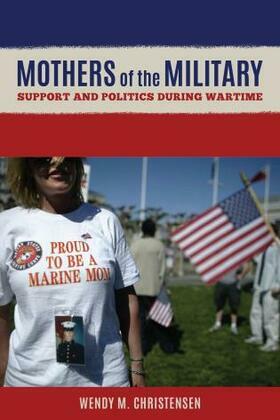 Mothers of the Military

Mothers of the Military examines the distinctive kinds of support required during an increasingly privatized war, specifically material, moral and healthcare support. Mothers are a particularly key part of the current support system for service members, and Wendy Christensen follows the mothers of U.S. service members in the War on Terrorism through the stages of recruitment, deployment, and post-deployment. Bringing to light the experiences and stories of women who are largely invisible during war—the mothers of service members.

Over 2.5 million members of the U.S. military have deployed to Iraq or Afghanistan during the now 16 year-long war. Each service member has loved ones—spouses, parents and children—who provide necessary emotional and physical support during deployment. This book has three goals. The first is to make mothers experiences during wartime visible. The second is to interrogate what support means during war. Finally, it examines the impact of war support on mothers’ political participation.

Ideally, civilians provide moral approval of war, patriotism, and extend understanding and appreciation of the sacrifice enlistees and their families are making. But, in these long wars, public and political approval has plummeted. It is not surprising this narrow slice of Americans dealing with the daily realities of war feels increasingly separate from civilians. Military families are isolated from those Americans who are able to ignore the war or offer superficial expressions of patriotic gratitude.

Mothers occupy a complex gendered location during wartime. Even though women are now serving in combat positions, women have historically held down the home front, where family labor is still assigned disproportionately to women. However, the military does not treat mothers and fathers equally. The military assumes fathers will be supportive of service, and calls on them to be proud of the courageous decision their child has made. They consider mothers, on the other hand, potential impediments to service, not wanting their child in harm’s way. Through each stage of service, mothers take on different kinds of support for their child, for the military, and for war policy.

At each stage of war, mothers are prescribed a gendered support position. In recruitment material, the military assumes mothers will be emotional and worried about enlistment, so they appeal to mother’s love and need for their child to be safe. During deployment, mothers provide supplies and moral support. Declining enlistment numbers and a long war have led to multiple deployments and unprecedented burdens on military families. These mothers step in to help with childcare and finances. Furthermore, mothers are overwhelmingly, according to military studies, the ones providing mental and physical healthcare when veterans need it. As providers of critical systems of war support, mothers bear much of the burden of the current wars.

War provides mothers a way to participate in the national project, but the uneven burden of being a constant “supporter” further marginalizes their citizenship. The gendered support role the military designs for mothers is not designed to facilitate active democratic citizenship but rather to make it seem natural that they, too, fall in line with the chain of command. Mothers of the Military, as a whole, asks how the acts of supplying material, moral, and medical support end up so often marginalizing mothers as citizens from the political process and under what conditions do mothers resist?