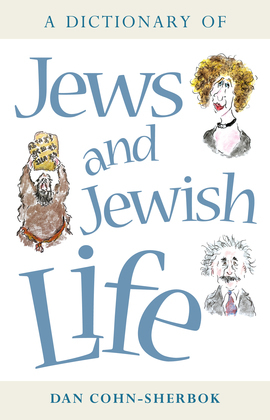 A Dictionary of Jews and Jewish Life

A Dictionary of Jews and Jewish Life is a handy guide for anyone seeking knowledge about the Jewish faith and the Jewish people. Containing thousands of entries, it describes a vast number of features of the Jewish religion as well as Jewish figures from the past to the present. From angels to the Zohar, from Moses to Groucho Marx, from the Garden of Eden to the Babylonian Talmud, this dictionary contains a treasure house of information about Jews and Judaism as well as some typical Jewish jokes.

Not only is A Dictionary of Jews and Jewish Life marvellously informative, its considerable scholarship is leavened by a wit that is both profoundly Jewish and inimitably Dan Cohn-Sherbok’s.
Professor Melissa Raphael, Professor of History, Religion, Philosophy and Ethics, University of Gloucestershire

A very useful and easy-to -read dictionary for anyone interested in Jews and Judaism. Dan Cohn-Sherbok has produced an accessible and impressive one-volume dictionary which will help anyone who wants to turn to a single source for brief definitions of Jewish customs, practices, religion and history as well as Jewish biographies.
Ed Kessler, Founder Director of the Woolf Institute, and Fellow of St Edmund's College, Cambridge

A lively and informative source of information, very useful for anyone working in Jewish Studies.
Oliver Leaman, Professor of Philosophy, University of Kentucky

This is an excellent dictionary of important concepts, events, and individuals in Jewish life and history. It provides cogent and concise information about the Jewish people, which will be very useful to scholars, students, and interested readers.
William D. Rubinstein, Emeritus Professor, University of Wales- Aberystwyth