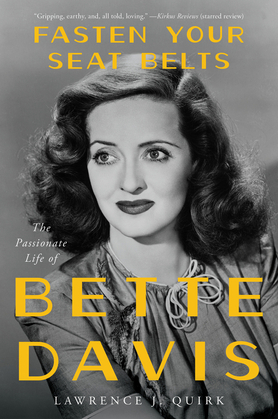 by Lawrence J. Quirk (Author)
Excerpt
Nonfiction Biography & autobiography Women
warning_amber
One or more licenses for this book have been acquired by your organisation details
EPUB
26 loans, One at a time
Details

The illuminating, comprehensive biography of Bette Davis, one of the most electrifying Hollywood stars ever to grace the silver screen.

With a career spanning six decades and more than eighty films, Bette Davis is synonymous with Hollywood legend. From her incandescent performance as Margo Channing in All About Eve, to her terrifying, psychopathic Jane Hudson in What Ever Happened to Baby Jane?, Davis generated electricity wherever she appeared, whatever she did—and not just on the silver screen. Her personal life was as passionate as her career and was so fiery that it eventually consumed her.

In this landmark biography, Lawrence J. Quirk takes us behind the scenes of all of Davis’s movies, from her early unpromising roles, to her commanding presence at the pinnacle of stardom, to her degrading exploitation in horror films at the end of her career. Quirk delves into Davis’s four unhappy marriages, as well as her frosty, manipulative relationships with her three children. Also revealed are her many affairs through the years with leading men, bit players, servicemen during World War II, and, very late in her life, much younger men, who repaid her by using her and deserting her. Intense, volatile, ruled often by her emotions, Bette Davis was described by one critic as "a force of nature that could find no ordinary outlet."

Fasten Your Seat Belts brilliantly explores the life and career of Bette Davis to show us the fascinating original she was.