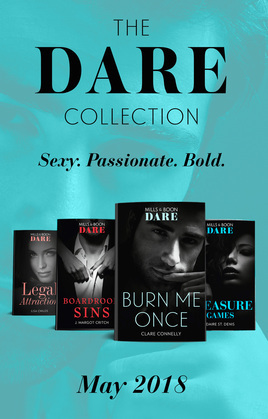 The Dare Collection: May 2018: Burn Me Once / Boardroom Sins / Pleasure Games / Legal Attraction

Burn Me Once by Clare Connelly

Ally Douglas has made a deal with Ethan Ash: just sex, no strings, no for ever. All she knows about him is that he’s a world-famous rock star and absolutely gorgeous. Their sexual chemistry is instant, magnetic, and it satisfies their needs. Only now Ethan has started to break the rules—will Ally be able to stop herself from getting burned.

In college, Rebecca Daniels and Brett Collins had a hot rivalry—with sexy benefits. Brett’s company has competed with the Daniels family business for years, and now, with Rebecca back in town as CEO, Brett initiates a hostile takeover… Just after they share a seriously naughty encounter! Now the battlefield is both the boardroom and the bedroom. But sometimes the line between love and hate is thinner than you think…

After catching her fiancé cheating, Jasmine Sweet is on her Parisian honeymoon alone. She’s determined to have an adventure! But an altercation resulting in temporary amnesia is more the stuff of nightmares. Then she meets a gorgeous stranger, and her time in France becomes a tour de fantasy! Luca shows her desires she never thought to experience—until their sexy dalliances become more than just a game…

Criminally handsome divorce lawyer Ronan Hall decimated Muriel Sanz’s reputation to win her ex a higher settlement. In retaliation, she wants to kill his career. They should hate each other. But they can’t keep their hands—or their lips—to themselves. If they don’t destroy each other in court, they may just destroy each other in the bedroom…