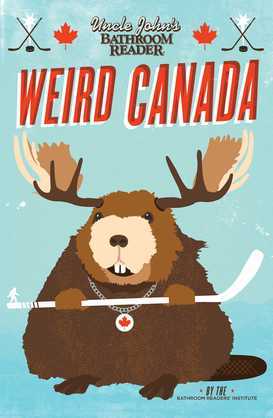 The Great White North is revealed as the Great Weird North in this entertaining tome from the best-selling Bathroom Reader series.

Did you know that Canada was almost called Hochelaga? That’s just one of thousands of wacky facts awaiting readers in Uncle John’s quirky celebration of Earth’s second largest country. You’ll find page after page of bizarre history (like why the beaver was once classified as a fish), plus head-scratching news items (like the crook who returned to the Tim Hortons he’d just robbed to tip the workers), odd places to go (like Mr. Spock’s birthplace in a town called Vulcan), and crazy eats (like the restaurant that makes you eat in complete darkness). So whether you live in Come By Chance, Joe Batt’s Arm, Starvation Cove, or anywhere else inside (or outside) of Canada, yukon count on Uncle John to deliver a world of weirdness from all over this great country. For example:

- Cow-patty bingo in Alberta (Rule #1: Wear gloves)
- How to enforce the new Quebec law that requires dogs to be bilingual
- The sea of Molson Golden that once shut down an Ontario freeway
- The mystery of the mini earthquakes in a New Brunswick town
- Why it’s illegal to kill a sasquatch in British Columbia
- The Nova Scotia company that makes mattresses for cows
- Saskatchewan’s Willow Bunch Giant, a real man who could lift a horse over his head
- The giant fiberglass “Happy Rock” statue in--where else?--Gladstone, Manitoba
And much, much more!