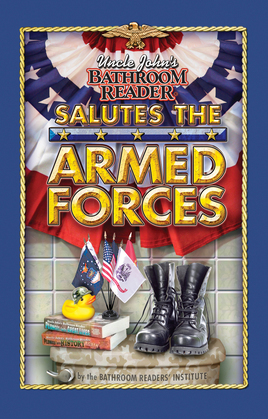 Uncle John's salutes the men and women of the armed forces!

Army, Navy, Air Force, Marines, and the Coast Guard! The patriotic folks at the BRI have stormed the proverbial beaches of Normandy and beyond to bring you this salute to the greatest force for good on planet Earth! Make your way through the ranks and read about the history, triumphs, trials, and humor of those who serve. At nearly 500 pages, this is the book you want by your side while you wait it out in the fox hole. Read about…

* The Semper Fi story
* A history of the draft
* The real Private Ryan
* Dog tags then and now
* Medal of Honor winners
* M*A*S*H: the true story
* The original Flying Tiger
* Beetle Bailey and other cartoon soldiers
* What it takes to be in the Special Forces
* Can you see me now? The story of camouflage
And much, much more!