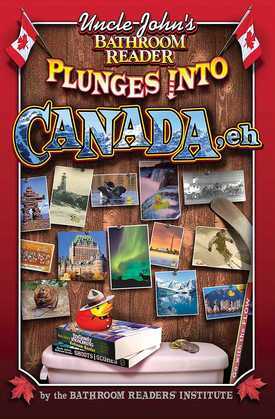 Uncle John's taking the plunge . . . into the Great White North!

For 25 years, Uncle John’s Bathroom Reader has been wildly popular in Canada, so we decided to dedicate an entire edition to our friends in the Great White North--even though much of the continental U.S. is north of Canada’s southernmost point. That misconception--and a whole lot more--is revealed in this loving ode to a friendly nation with a colorful history and some of the most beautiful scenery in the world. Whether you’re a true Canuck, or just always wanted to be one, Yukon count on us to deliver great bathroom reading! Read about…

* Stealing the Stanley Cup (literally)
* The origins of Tim Hortons and Kraft dinners
* Jellied moose nose and other Canadian delicacies
* Move over Napa: the story of Canadian “ice wine”
* The government’s secret official UFO division
* Canada’s homegrown rock ’n’ roll bands
* All about those dam beavers
* The answer to Canada’s most burning question: Does Santa Claus really have his own postal code?
And much, much more!