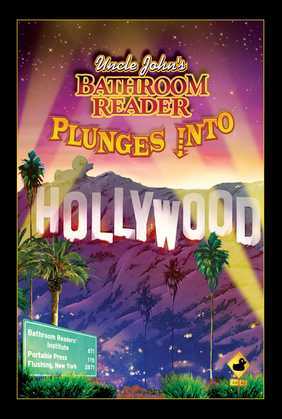 Hooray for Hollywood! Uncle John takes on Tinseltown in this fascinating look at the movies and the people who make them. Come for the trials, tribulations, and trivia! Stay for the mysteries, magic, and mayhem! You’ll go behind the scenes for the sordid scandals, biggest bombs, greatest triumphs, and the unsung heroes who make it all come together. Featuring quotes, puzzles, quizzes, and Uncle John’s famous “running feet” facts at the bottom of every page, this book will give you a new appreciation for the Silver Screen (and you’ll know exactly what a gaffer and best boy do). What else is in here? Check out these previews!

* Bad boys on location
* The origin of Variety
* The biggest cult movie of all time
* The “Blond Bombshell Murder Mystery”
* How Ray Harryhausen brought fantasies to life
* Wretched reviews (for what are now considered great films)
* The strange Pink Floyd and Wizard of Oz connection
* The “Taglines of Terror” quiz
* Bathrooms on the big screen
* Unfortunate remakes
* Haunted Hollywood
And much, much more!