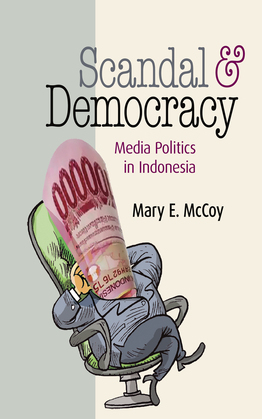 When a popular uprising topples an authoritarian leader,, the moment of regime change sparks hope for a more open, democratic society. Yet making a successful transition to an enduring democracy has proven to be both difficult and rare. In Scandal and Democracy, Mary E. McCoy looks at what happens once the dictator has fallen and discovers that a more challenging problem remains. How can the newly democratizing nation avoid reversing course, she asks, reverting to authoritarian solutions in response to the daunting problems brought by the sudden change? The troubled transitions that have derailed democratization in growing numbers of nations worldwide make this question a major concern for scholars and citizens alike.

This study of Indonesia's transition from authoritarian rule finds that democratization's success or failure, consolidation or reversal depends, to a surprising extent, on the role of the media. Although press freedom is widely recognized as a defining element of modern democracies, the media's part in democratic consolidation remains only partly understood. Scandal and Democracy examines how the media's use of new freedoms, particularly the publicizing of political scandal and intra-elite conflict, can ward off a slide into pseudo-democracy or a return to authoritarian rule. As Indonesia approaches the twentieth anniversary of its dramatic student-led revolution of 1998, it remains among the most resilient of the world's new democracies and one of the few successful democratic transitions in the Muslim world. McCoy explores the media's role in this transition and corroborates that analysis with comparative cases from Mexico, Tunisia, and South Korea, and offers the reader a counter-intuitive perspective to explain success and failure in modern transitions to democracy.