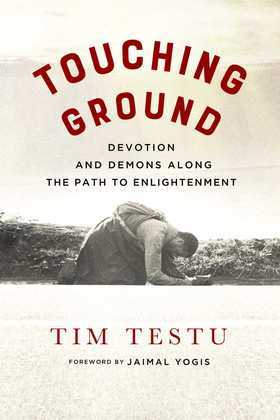 The vivid story of a hippie, a carpenter, a Vietnam vet, an alcoholic, a marine engineer, and a great dad who battled his demons on the Buddhist path.

From October 16, 1973, to August 17, 1974, Tim Testu walked all the way from San Francisco to Seattle, bowing his head to the ground every three steps. And that’s not even the best part of his story.

Tim Testu was one of the very first Americans to take ordination in Chinese Zen Buddhism. His path—from getting kicked out of school to joyriding in stolen boats in the Navy to squatting in an anarchist commune to wholehearted spiritual engagment in a strict Buddhist monastery—is equal parts rollicking adventure and profound spiritual memoir.

Touching Ground is simultaneously larger than life and entirely relatable; even as Tim finds his spiritual home with his teacher, the legendary Chan master Hsuan Hua, he nonetheless continues to struggle to overcome his addictions and his very human shortcomings.

Tim never did anything halfway, including both drinking and striving for liberation. He died of leukemia in 1998 after packing ten lifetimes into fifty-two years.