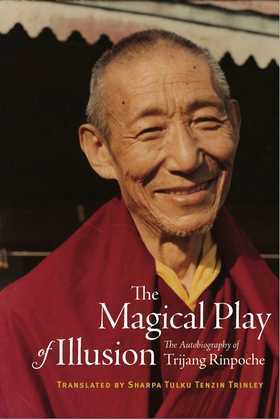 The Magical Play of Illusion

The Dalai Lama’s teacher's autobiography offers glimpses into the young Dalai Lama's spiritual upbringing and his escape from Tibet.

Trijang Rinpoche was born to an aristocratic Tibetan family in 1901 and quickly recognized as the reincarnation of a very important high lama. Eventually appointed a mentor to the young Fourteenth Dalai Lama, Trijang became one of his most trusted confidants. His status gave him a front-row seat to many of the momentous historical events that befell Tibet. Rinpoche observes the workings of Tibetan high society and politics with an unvarnished frankness, including inside details of encounters between the Dalai Lama and Mao Tse Tung, Jawarlal Nehru, Pope John Paul II, and Indira Gandhi. Most widely known as a yogi with deep and profound, lifelong religious training, Trijang was also a statesman, a preserver of culture, a poet, writer, and artist. His autobiography is a beautifully written tour-de-force account of Tibetan life in the twentieth century, including intimate details about the upbringing of the Dalai Lama.