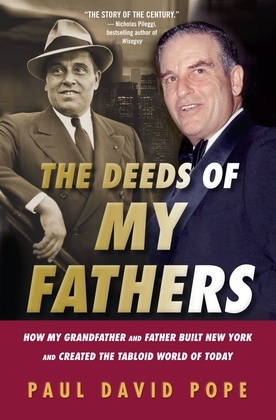 The Deeds Of My Fathers: How My Grandfather and Father Built New York and Created the Tabloid World of Today

This engrossing saga begins when Generoso Pope, Sr., just 15, flees Italy and his domineering father, sailing to America with only pennies in his pockets. He passes through Ellis Island in 1906 and soon finds work in the sand pits of Long Island, just as this coarse sand, mixed with cement, is becoming New York City?s key building block. He becomes foreman, then president of a company supplying material for landmarks like Radio City Music Hall and Rockefeller Center. Intent on becoming a kingmaker, he also constructs a media empire, becoming publisher of the Italian-American newspaper, Il Progresso. His endorsement is soon sought by politicians aspiring to become mayor of New York City and president of the United States.