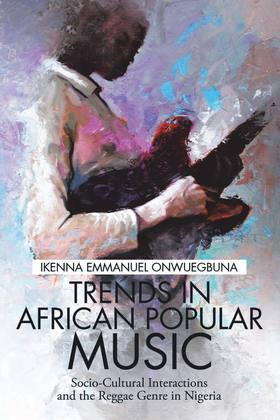 by Ikenna Emmanuel Onwuegbuna (Author)
Excerpt
Nonfiction Arts Music History & criticism
warning_amber
One or more licenses for this book have been acquired by your organisation details
EPUB
Unlimited loans, One at a time
Details

Popular music an acculturative product of the African folk musicscrutinized along the lines of musical and social processes as inseparable pair in developing the various genres of the eclectic musical form. In Nigeria, it is the congruent collaboration of creativity and politico-socio-economic activities of the mid-1940s (the period following the World War II) that evolved the various genres of popular music of the landa process that is still in being! The social processes that span through the diverse fields of economics, politics, linguistics, sociology, philosophy, and religion made up a manifold agency of acculturation, commercialization, urbanization, and class stratifications. Similarly, the musical processes emanating from the folk musical practices of conception, composition, and classification of genres; recruitment of group members and administrative personnel; training, packaging, costuming, and aesthetics; and then the performance proper are carried over into a parallel development of a neo-folk form that became popular. The popularity of the new form is due to a socio-musical interchange that is both structural and functional. The peculiar nature of the product of this new musical expressionpoptherefore presents four possible angles for definition. The definitions could be stylistic, sociological, process- or theory-based. The genres developed include highlife, afrobeat, rock, calypso, disco, hip hop, rhythm n blues, funk, and reggae. However, the star feature of this investigation is the Afro-reggae genre of Nigeria. The primary research process of survey was backed up by historical and descriptive methods to unearth the leaning on the rhythm of social life by popular music artistes to develop the African reggae genre, especially in Nigeria.