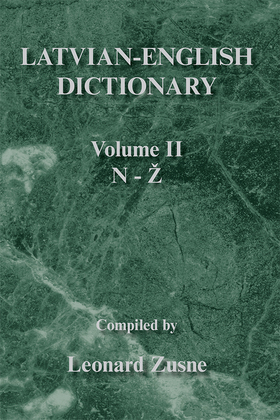 This unabridged work includes a previously distributed DICTIONARY OF LATVIAN PROVERBS, making it unique and more attractive than similar publications.

A translating dictionary, like this one, is a practical dictionary that translates words in existing texts. It does not, as a rule, provide descriptions or explanations, nor does it set norms of how words should be spelled. The aim of dictionary users can be either to understand the source language (the language of the headwords) or to translate it into the target language(the language of the translation equivalents). The users first language can be either the source language or the target language. This makes for four possible types of interlingual dictionaries (descriptive, prescriptive, or translating).

Existing Latvian-English dictionaries indicate that they are intended for users whose first language is Latvian and whose purpose is to translate it into English. This dictionary is intended primarily for users whose first language is English and who wish to understand texts written in Latvian. This, of course, does not preclude Latvian speakers from using it to translate from Latvian into English, i.e., to produce English texts. English-speaking Latvians may, in fact, find it helpful for accurate and natural translation.

Other features of this dictionary are: the number of entries(over 106,000), which is more than double that of any other Latvian-English dictionary; the use of American rather than British English; an extensive coverage of technical terms from all fields of science and technology; the comprehensive inclusion of spelling variants; and the inclusion of colloquialisms, common speech words, vulgar terms, slang, barbarisms, selected regionalisms, and terms found in folkloric language. [A dictionary of Latvian proverbs is included in the back.

The entries of this dictionary were collected from various extant monolingual and bilingual Latvian dictionaries, general and specialized: spelling dictionaries, technical dictionaries, etymological dictionaries, general encyclopedias, periodical literature, and many Latvian speakers. Of the latter, I want to single out the contribution of the late sea captain, Inats Lejnieks. In his time, the captain had commanded full-rigged sailing ships with Latvian crews, and he supplied the Latvian equivalents of the names of sails and principal ropes, spars, and part of the hull. I was fortunate to have captain Lejnieks share his expertise with me as this material was not available anywhere else.