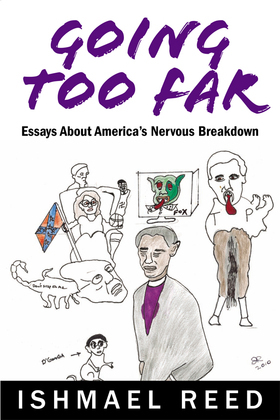 Ishmael Reed goes too far, again! Just as the fugitive slaves went to Canada and challenged the prevailing view that slaves were well off under their masters, Ishmael Reed has gone all the way to Quebec—where this book is published—to challenge the widespread opinion that racism is no longer a factor in American life.

In some ways, says Reed, the United States very much resembles the country of the 1850s. The representations of blacks in popular culture are throwbacks to the days of minstrelsy. Politicians are raising stereotypes about blacks reminiscent of those that the fugitive slaves found it necessary to combat: that they are lazy and dependent and need people to manage them.
Ishmael Reed establishes his diagnosis of a nervous breakdown in three parts. Part I on a black president of the United States is entitled “Chief Executive and Chief Exorcist, Too?” Part II on culture and representations of African Americans in our supposed post-race era, “Coonery and Buffoonery.” In Part III, “As Relayed by Themselves,” cultural figures have a chance to tell the story in their own words.