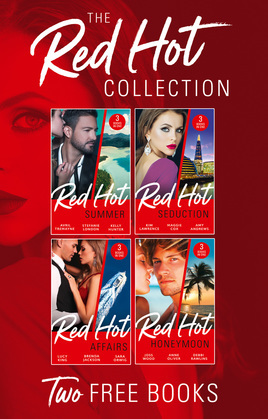 He may have made a saucy proposition but it was lawyer Kate who whipped up a contract for them both to sign! Scott’s seriously sexy and a complicated enigma that Kate’s determined to solve…

Brodie Mitchell and Chantal Turner haven’t seen each other since that fateful night when the searing heat between them ignited. On Brodie’s yacht, exploring their electric chemistry opens Brodie’s eyes to how much he wants Chantal!

After two years undercover, Jared West feels like a stranger in his old life. Still, he hasn’t lost his appreciation of a beautiful woman. He’ll get to know New Director of Operations Rowan intimately! But neither expects the extent of their undeniable chemistry!

Sebastian has resigned himself to a marriage of convenience until a flame-haired siren interrupts the ceremony! Mari Jones never imagined that the consequences of her plan would see her walking down the aisle… towards Sebastian!

Gene Bonnaire’s merciless and seductive reputation precedes him and Gene always gets what he wants, and what he wants now is Rose in his bed! But seducing this defiant beauty will be a challenge… Rose will be his greatest acquisition yet!

Sadie Bliss must avoid dangerously mouth-watering photographer Kent Nelson – but a road trip across the outback with the arrogant, brooding male puts an end to that idea. But surely, what happens in the outback, stays in the outback?

Finn Banning has bagged the honeymoon trip of a lifetime. The trouble is he’s now desperately in need of a wife! Callie Hollis needs to get out of the country so accepting Finn’s arrangement is perfect! But after one passionate kiss Callie’s struggling to remember what’s fake and what’s real.

The biggest business deal of his life looms – and to win it he needs a wife! Jordan Blackstone needs Chloe Montgomery – she’s as anti-commitment as him. But when passion between them flares out of control their exotic honeymoon starts to feel a little too real!

Hijack another couple's honeymoon? Dakota Shea can't believe she's done just that – and with someone like Tony San Angelo. So, who could have guessed that the surf, the sunsets and those incredible steamy nights would tempt her to make it all legal?

Laura’s decided to take charge of her life! However, the last thing she expects is to end up naked with the gorgeous guy next door… Then she gets a new job – on a Mediterranean island – and forgets about her passionate night until the island’s new king arrives….

Handsome star of the racing circuit Sandro Roselli sends Charlotte Warrington’s pulse speeding and her senses crazy! When he offers her a job one thing leads to another, but can their heady affair survive the dark secret the irresistible Italian hides?

Isabelle Smith isn't surprised that her new boss, Tony Ryder, doesn't remember her. Their night of passion was so long ago… So when he does and he makes her an offer, Isabelle thinks fast; she needs a wedding ring and this is now the negotiation of their lives!