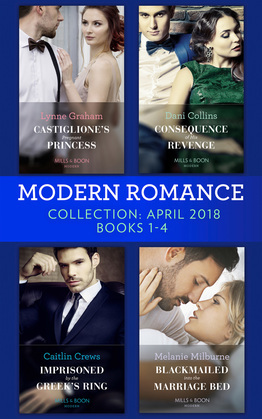 Expecting royal twins can only mean one thing…
She must wear the Castiglione crown!

Consequence of His Revenge by Dani Collins

In debt to the billionaire…
And bound for ever by his vengeance!

Imprisoned by the Greek's Ring by Caitlin Crews

His vengeance won’t be complete…
…until he has her as his bride!

Blackmailed into the Marriage Bed by Melanie Milburn

Vinn Gagliardi has everything he desires…
…except for his wife!