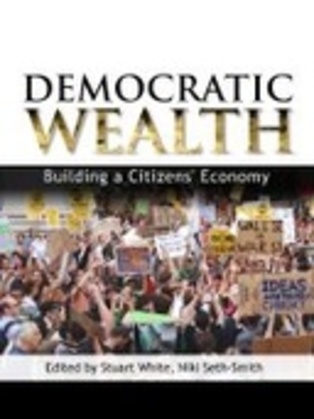 'Democratic Wealth: Building a Citizens' Economy'' is a collection of essays that challenges the poverty of thinking around economic policy, particularly after the 2007 financial crash. It explores the renewed interest in republicanism and suggests this as a framework to shape an economy that serves the common good. It is a selection of articles from a series published by openDemocracy and Politics in Spires, a blog run by the universities of Oxford and Cambridge.

The book is split into three parts. The first, Taking Back the Economy, features contributions from Philip Pettit, Thad Williamson, Joe Guinan, Jessica Kimpell and others on republican thinking and the market. The second, Republican Economy in Practice, looks at application around the globe, including contributions on cooperatives, sovereign wealth funds, basic income, tax fairness and green solutions and discusses how to develop these models at scale. In the third, Republican Politics, contributors including Quentin Skinner, Alex Gourevitch and Karma Nabulsi discuss the politics of republicanism, from challenging the surveillance state to democratising the workplace and harnessing the demands of new social movements for freedom from domination by the one per cent.

‘...as regards wealth, ... no citizen should be rich enough to be able to buy another, and none so poor that he has to sell himself...’ - Jean-Jacques Rousseau, Social Contract