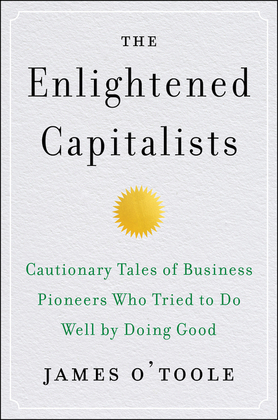 Today’s business leaders are increasingly pressured by citizens, consumers, and government officials to address urgent social and environmental issues. Although some corporate executives remain deaf to such calls, over the last two centuries, a handful of business leaders in America and Britain have attempted to create business organizations that were both profitable and socially responsible.

In The Enlightened Capitalists, James O’Toole tells the largely forgotten stories of men and women who adopted forward-thinking business practices designed to serve the needs of their employees, customers, communities, and the natural environment. They wanted to prove that executives didn’t have to make trade-offs between profit and virtue.

Combining a wealth of research and vivid storytelling, O’Toole brings life to historical figures like William Lever, the inventor of bar soap who created the most profitable company in Britain and used his money to greatly improve the lives of his workers and their families. Eventually, he lost control of the company to creditors who promptly terminated the enlightened practices he had initiated—the fate of many idealistic capitalists.

As a new generation attempts to address social problems through enlightened organizational leadership, O’Toole explores a major question being posed today in Britain and America: Are virtuous corporate practices compatible with shareholder capitalism?