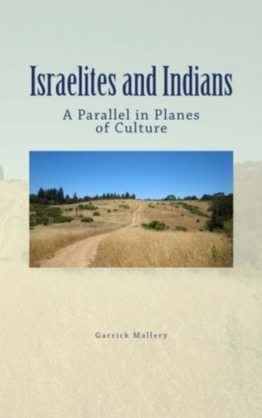 pMany authors have contended that the North American Indians were descendants of the "ten lost tribes of Israel." Prominent among them was James Adair, whose work, highly useful with regard to the customs of the southeastern Indians, among whom he spent many years, was mainly devoted to proof of the proposition. The Rev. Ethan Smith is also conspicuous. Even the latest general treatise on the Indians, published last year, and bearing the comprehensive title, "The American Indian," favors the same theory. The authors of the school mentioned rest their case on the fact, which I freely admit with greater emphasis, that an astounding number of customs of the North American Indians are the same as those recorded of the ancient Israelites. The lesson to be derived from this parallel is, however, very different from that drawn by those who have advocated the descent in question. The argument, strongly urged, derived from an alleged similarity between Hebrew and some Indian languages, especially in identity of certain vocables, may be dismissed forthwith. Perhaps the most absurd of all the coincidences insisted upon by Adair was the religious use of sounds represented by him to be the same as the word Jehovah. The "lost" Israelites when deported did not use orally the name given in the English version as "Jehovah," and the mode of its spelling and pronunciation is at this moment in dispute, though generally accepted as Jahveh; therefore, it would be most extraordinary if the tribes of Indians supposed to be descendants of the lost ten tribes of Israel should at this time know how to pronounce a name which their alleged ancestors practically did not possess... For brevity, the term "Indians" may be used—leaving the blunder of Columbus where it belongs—without iterating their designation as North American, though I shall not treat of the aboriginal inhabitants south of the United States. This neglect of Mexico and Central and South America is not only to observe my own limits, but because some of the peoples of those regions had reached a culture stage in advance of the northern tribes. To avoid confusion, the term "Israelites" may designate all the nation. Although the tribes became divided into the kingdoms of Israel and of Judah, when it is necessary to speak of the northern tribes they may be designated as the kingdom of Samaria. The shortest term, Jews, would be incorrect, as the people now scattered over the world and called "Jews" are chiefly the descendants of the southern branch or fractional part of the children of Israel, and have a special history beyond that common to them and their congeners./p
p /p