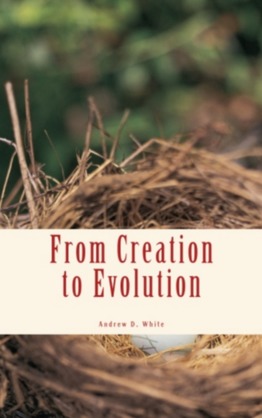 From Creation to Evolution

pThe Origin of Species had come into the theological world like a plow into an ant-hill. Everywhere those who were thus rudely awakened from their old comfort and repose had swarmed forth angry and confused. Reviews, sermons, books light and heavy, came flying at the new thinker from all sides. The keynote was struck at once in the Quarterly Review by Wilberforce, Bishop of Oxford. He declared that Darwin was guilty of "a tendency to limit God's glory in creation"; that "the principle of natural selection is absolutely incompatible with the word of God"; that it "contradicts the revealed relations of creation to its Creator"; that it is "inconsistent with the fullness of his glory"; that it is "a dishonoring view of Nature"; and the bishop ended by pointing Darwin's attention to "a simpler explanation of the presence of these strange forms among the works of God," that cause being—"the fall of Adam." - - Nor did the bishop's services end here; at the meeting of the British Association for the Advancement of Science he again disported himself in the tide of popular applause. Referring to the ideas of Darwin, who was absent on account of illness, the bishop in a public speech congratulated himself that he was not descended from a monkey. The reply came from Huxley, who said in substance: "If I had to choose, I would prefer to be a descendant of a humble monkey rather than of a man who employs his knowledge and eloquence in misrepresenting those who are wearing out their lives in the search for truth."/p
p /p