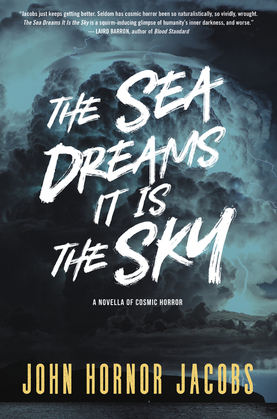 The Sea Dreams It Is the Sky

"The Sea Dreams It Is the Sky is moving and memorable, one of the novellas of the year." -- Locus Magazine

They had escaped their country, but they couldn’t escape the past

Having lost both her home and family to a brutal dictatorship, Isabel has fled to Spain, where she watches young, bronzed beauties and tries to forget the horrors that lie in her homeland.

Shadowing her always, attired in rumpled linen suits and an eyepatch, is “The Eye,” a fellow ex-pat and poet with a notorious reputation. An unlikely friendship blossoms, a kinship of shared grief. Then The Eye receives a mysterious note and suddenly returns home, his fate uncertain.

Left with the keys to The Eye’s apartment, Isabel finds two of his secret manuscripts: a halting translation of an ancient, profane work, and an evocative testament of his capture during the revolution. Both texts bear disturbing images of blood and torture, and the more Isabel reads the more she feels the inexplicable compulsion to go home.

It means a journey deep into a country torn by war, still ruled by a violent regime, but the idea of finding The Eye becomes ineluctable. Isabel feels the manuscripts pushing her to go. Her country is lost, and now her only friend is lost, too. What must she give to get them back? In the end, she has only herself left to sacrifice.

THE SEA DREAMS IT IS THE SKY asks:

How does someone simply give up their home...especially when their home won’t let them?