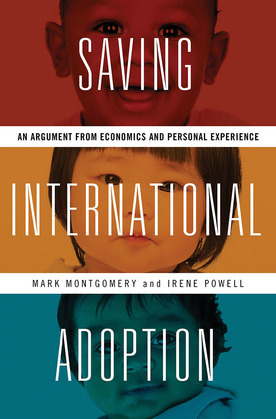 International adoption is in a state of virtual collapse, rates having fallen by more than half since 2004 and continuing to fall. Yet around the world millions of orphaned and vulnerable children need permanent homes, and thousands of American and European families are eager to take them in. Many government officials, international bureaucrats, and social commentators claim these adoptions are not "in the best interests" of the child. They claim that adoption deprives children of their "birth culture," threatens their racial identities, and even encourages widespread child trafficking. Celebrity adopters are publicly excoriated for stealing children from their birth families.

This book argues that opposition to adoption ostensibly based on the well-being of the child is often a smokescreen for protecting national pride. Concerns about the harm done by transracial adoption are largely inconsistent with empirical evidence. As for trafficking, opponents of international adoption want to shut it down because it is too much like a market for children. But this book offers a radical challenge to this view—that is, what if instead of trying to suppress market forces in international adoption, we embraced them so they could be properly regulated? What if the international system functioned more like open adoption in the United States, where birth and adoptive parents can meet and privately negotiate the exchange of parental rights? This arrangement, the authors argue, could eliminate the abuses that currently haunt international adoption.

The authors challenge the prevailing wisdom with their economic analyses and provocative analogies from other policy realms. Based on their own family's experience with the adoption process, they also write frankly about how that process feels for parents and children.