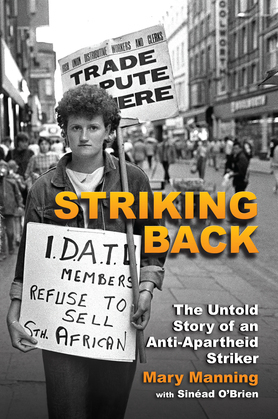 ‘Young shopworkers on Henry Street in Dublin, who in 1984 refused to handle the fruits of apartheid, provided me with great hope during my years of imprisonment, and inspiration to millions of South Africans.’

Dunnes Stores cashier Mary Manning knew little about apartheid when, at the age of twenty-one, she refused to register the sale of two Outspan South African grapefruits under a directive from her union. She was suspended and nine of her co-workers walked out in support. They all assumed they would shortly return to work.

But theirs were kindling voices, on the cusp of igniting a mass movement they couldn’t even imagine. Despite harassment from the Gardaí and disparagement from the Irish government and even the Catholic Church, they refused to be silenced. Within months they were embroiled in a dispute that captured the world’s attention.

In this searing account, Mary tells the extraordinary story of their public fight for justice, as well as her emotive journey of discovery into her family’s past. Mary’s mother had been forced to carry a secret burden of shame for her whole life by the same oppressive establishment Mary was fighting.

Striking Back is a provocative and inspiring story that epitomises the resilience of hope and the human spirit, even under the most formidable of circumstances. It shows that each of us has the power to change the world.