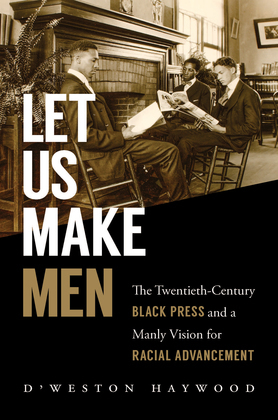 During its golden years, the twentieth-century black press was a tool of black men's leadership, public voice, and gender and identity formation. Those at the helm of black newspapers used their platforms to wage a fight for racial justice and black manhood. In a story that stretches from the turn of the twentieth century to the rise of the Black Power Movement, D'Weston Haywood argues that black people's ideas, rhetoric, and protest strategies for racial advancement grew out of the quest for manhood led by black newspapers.

This history departs from standard narratives of black protest, black men, and the black press by positioning newspapers at the intersections of gender, ideology, race, class, identity, urbanization, the public sphere, and black institutional life. Shedding crucial new light on the deep roots of African Americans' mobilizations around issues of rights and racial justice during the twentieth century, Let Us Make Men reveals the critical, complex role black male publishers played in grounding those issues in a quest to redeem black manhood.