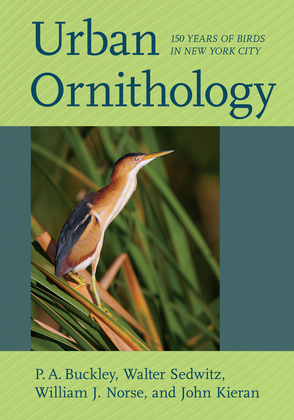 Urban Ornithology is the first quantitative historical analysis of any New York City natural area’s birdlife and spans the century and a half from 1872 to 2016. Only Manhattan’s Central and Brooklyn’s Prospect Parks have preliminary species lists, not revised since 1967, and the last book examining the birdlife of the entire New York City area is now more than fifty years old.

This book updates the avifaunas of those two parks, the Bronx, and other New York City boroughs. It treats the 301 bird species known to have occurred within its study area—Van Cortlandt Park and the adjacent Northwest Bronx—plus 70 potential additions. Its 123 breeding species are tracked from 1872 and supplemented by quantitative breeding bird censuses from 1937 to 2015. Gains and losses of breeding species are discussed in light of an expanding New York City inexorably extinguishing unique habitats.