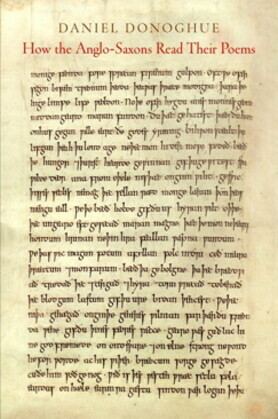 How the Anglo-Saxons Read Their Poems

The scribes of early medieval England wrote out their vernacular poems using a format that looks primitive to our eyes because it lacks the familiar visual cues of verse lineation, marks of punctuation, and capital letters. The paradox is that scribes had those tools at their disposal, which they deployed in other kinds of writing, but when it came to their vernacular poems they turned to a sparser presentation. How could they afford to be so indifferent? The answer lies in the expertise that Anglo-Saxon readers brought to the task. From a lifelong immersion in a tradition of oral poetics they acquired a sophisticated yet intuitive understanding of verse conventions, such that when their eyes scanned the lines written out margin-to-margin, they could pinpoint with ease such features as alliteration, metrical units, and clause boundaries, because those features are interwoven in the poetic text itself. Such holistic reading practices find a surprising source of support in present-day eye-movement studies, which track the complex choreography between eye and brain and show, for example, how the minimal punctuation in manuscripts snaps into focus when viewed as part of a comprehensive system.

How the Anglo-Saxons Read Their Poems uncovers a sophisticated collaboration between scribes and the earliest readers of poems like Beowulf, The Wanderer, and The Dream of the Rood. In addressing a basic question that no previous study has adequately answered, it pursues an ambitious synthesis of a number of fields usually kept separate: oral theory, paleography, syntax, and prosody. To these philological topics Daniel Donoghue adds insights from the growing field of cognitive psychology. According to Donoghue, the earliest readers of Old English poems deployed a unique set of skills that enabled them to navigate a daunting task with apparent ease. For them reading was both a matter of technical proficiency and a social practice.