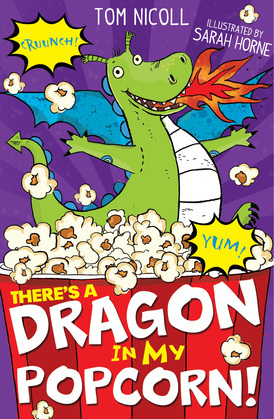 There's a Dragon in my Popcorn

Inspired by the latest Slug Man movie, Eric and Pan decide to enter a competition for young filmmakers on the theme of superheroes. Naturally, the Mini-Dragon has a real talent for scriptwriting. If only they had something better to make their film on than Mum’s dodgy old mobile…

Then Toby from next door steps in and offers to lend Eric some new kit – on the condition that he can be the producer. Before long, Toby takes over completely, sacking Eric’s friends from the lead roles, doing a complete rewrite of the script and hiring a team of pros to get the film finished. Eric says he wants nothing more to do with the project and, with only a couple of days before the screening, there’s no time to start again.

But Pan secretly works behind the scenes to bring Eric’s original vision to life. Eric’s film goes down a storm at the screening, with Pan stealing the show as a giant fire-breathing dragon. Eric bags the award for best special effects, while a furious Toby walks away with nothing.