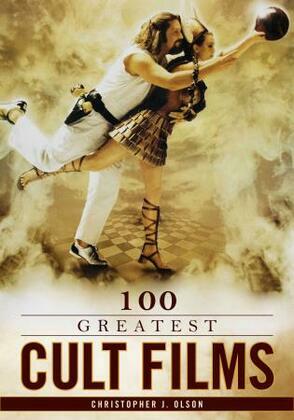 The term “cult film” may be difficult to define, but one thing is certain: A cult film is any movie that has developed a rabid following for one reason or another. From highly influential works of pop art like Eraserhead and Faster, Pussycat! Kill! Kill! to trash masterpieces such as Miami Connection and Fateful Findings, thousands of movies have earned recognition as cult classics over the years, and new movies rise to cult status every year. So how do viewers searching for the best or most important cult films decide where to start?

In 100 Greatest Cult Films, Christopher J. Olson highlights the most provocative, intriguing, entertaining, and controversial films produced over the last century. The movies included here have either earned reputations as bona fide cult classics or have in some way impacted our understanding of cult cinema, often transcending traditional notions of “good” and “bad” while featuring memorable characters, unforgettably shocking scenes, and exceptionally quotable dialogue.

With detailed arguments for why these films deserve to be considered among the greatest of all time, Olson provides readers fodder for debate and a jumping-off point for future watching. A thought-provoking and accessible look at dozens of cinematic “treasures,” this resource includes valuable information on the films, creators, and institutions that have shaped cult cinema. Ultimately, The 100 Greatest Cult Films offers readers—from casual cinephiles, film scholars, and avid fans alike—a chance to discover or re-discover some of the most memorable films of all time.