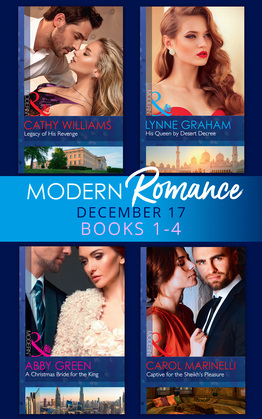 Modern Romance Collection: December 2017 Books 1 - 4: His Queen by Desert Decree / A Christmas Bride for the King / Captive for the Sheikh's Pleasure / Legacy of His Revenge (Mills & Boon e-Book Collections)

His Queen by Desert by Lynne Graham

Teacher Molly Carlisle is furious when she's kidnapped by an impulsive young sheikh and taken to the kingdom of Djalia. Until she meets her abductor’s brother and his commanding charisma sends a shockwave of need through her…

A Christmas Bride for the King by Abby Green

Reluctant ruler Sheikh Salim Al-Noury would rather abdicate than taint his realm with his dark secrets. Until one exquisitely beautiful diplomat is hired to persuade him to reconsider the throne…

Captive for the Sheikh’s Pleasure by Carol Marinelli

Sheikh Ilyas al-Razim was born to be king. He won’t let anything stand in his way, especially not the waitress daring to think she can blackmail him! It’s his duty to protect his family’s honour—even if it means taking impossibly stunning Maggie Delaney as his hostage…

Legacy of His Revenge by Cathy Williams

Sophie Watts is mortified when she crashes into billionaire Matias Rivero’s luxury sports car. But even worse is his proposition that she work off her debt by becoming his chef for a glamorous weekend party at his mansion!